"We are not defined by by what knocks us down—we are defined by how we get back up." Madeleine Black 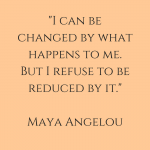 recovery and healing after being gang raped at aged 13, I would have to say it has been finding my voice.

I silenced myself for so many years mainly due to the immense feelings of guilt and shame that I felt. My opinion of myself was so low; I hated myself and had terrible self-esteem.

I thought that I was contaminated, dirty and worthless for so many years and was so worried if anybody found out that they would think the same. Somehow, I believed that what was done to me was a reflection of me and I was to blame for being raped.

So I bottled it all up for years inside, but I quickly discovered that what we don’t talk about leaks out of you and it affected me in so many ways over the years in the shape of fears, phobias and any way I could numb out.

However, when my eldest daughter became 13, I started to have a lot of flashbacks, nightmares and memories return. At first I thought I was going mad and I had made them up, because I had worked for many years at Women’s Aid and Rape Crisis and had heard so many women’s stories. 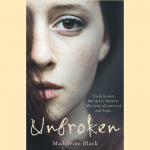 I thought to myself that if it had been so bad I would have remembered it. I understand now because I work as a psychotherapist, that when we experience a trauma, the mind’s job is to numb it out and it only reveals it back to you when you’re ready to face it, which can take many years.

Going Back to Therapy

So I decided that in order to get some peace with all the images running through my mind, I would go back to therapy to try and get rid of them. I quickly discovered that getting rid of them wasn’t an option; in fact stepping into those painful & shameful memories was my way out.

Giving my story oxygen to my therapist was one of the hardest things I’ve ever done as it brought up so much shame in me but paradoxically it also taught me to stand grounded in my shame, which diminished it. For years I couldn’t even say the word “rape” and here I was diving into my worse nightmare.

But I found over time, the more I worked it the less energy all the pictures and memories had and by the end of the three years, there was no sting left in them at all. I had successfully neutralized it. 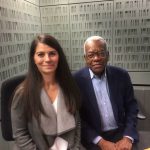 I have come a long way since those days and have now written a book and speak publicly and share my story to help break down the shame, stigma and silence that surrounds sexual violence. I’m not suggesting that everybody goes out and speaks in a public forum. But share your story with someone you trust to break down your own silence and guilt. Running away from the truth, trapped me. Facing up to everything with no more denial saved me. Ultimately the way in; was my way out.