DORA E. MCQUAID is an award-winning poet, activist, speaker and teacher, whose work embodies the intersections of the arts and activism, service and empowerment. Her unique blend of art, emotion and service has earned her numerous service and literary awards and honors. Dora’s activism addressing sexual and domestic violence led to her portrait replacing that of former football coach and convicted pedophile Jerry Sandusky in 2012 in the Inspirations Mural near Penn State. 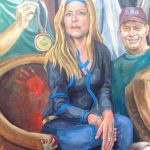 She was honored with a Pushcart Prize nomination for poetry in 2014, as a 2012 Remarkable Woman of Taos, New Mexico and won the 2011 New Mexico Woman Writer’s Fellowship from A Room of Her Own Foundation. Dora’s efforts also garnered a 2003 Pennsylvania Governor’s Pathfinder Award, recognition by the Pennsylvania Senate and a Vagina Warrior Award, all while serving as faculty at Penn State between 1999 and 2006, before pursuing poetry, performance and activism fulltime. Dora performs, speaks and teaches internationally, works collaboratively with a wide array of artists and activists and publishes widely. She is the author of the groundbreaking collection of poems, the scorched earth, released by Baskerville Publishers in 2015 as an Expanded, Second edition. Eve Ensler, award-winning author of The Vagina Monologues, wrote the Foreword to this new edition of the scorched earth, calling it “startling and visionary…”

For more information about Dora, her activism and writing, please visit:

For Dora’s insight on change and transformation click here

Please join the conversation. We would love to hear from you—because you never know who you might inspire or where it might lead. Thanks.